Jennifer Hemmick Gallagher (UH 2004) was a member of the first class of Terry Scholars at the University of Houston. She may have left San Antonio, but she never left the classroom. Upon graduating in 2008 with a degree in music education, she launched the choir program at Nolan Ryan Junior High School, in Pearland, where she taught for eight years. Last year she entered the big leagues to start a choir program at Shadow Creek High School. The Class of 2020 will be her first group of seniors that she will have directed from 6th-12th grade.

Teaching at the high school level has always been the end goal for Jennifer, but she shared how special the middle schoolers were to her. Typically, many consider middle school to be a tough age all around. Hollywood has even chronicled the misadventures of middle schoolers through movies and television shows. These “characters” are the reason why Jennifer loved teaching that age. While describing the two age groups, she said, “middle schoolers may be weird, but it was fun watching them try to find their way and become their own person. Meanwhile, high schoolers tend to face more difficult issues as they are trying to define their path while continuing to figure out their place in the world.” The leadership and mentorship components to teaching are what drove her to pursue this music-related career rather than one focused on performance. This drive also served her well as a Terry Scholar all four years. 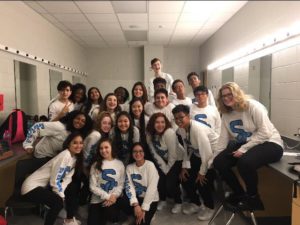 Jennifer was not only a member of the inaugural class of UH Terry Scholars; she also served as president of the student organization. Her service to the organization helped lead to many traditions including pho nights and fountain jumping after banquets, according to Franco Martinez, Scholar Relations Coordinator and UH Terry Alumnus. In Jennifer’s sophomore year, she served as the Terry Scholars’ Residence Advisor in the dorms at UH. Franco had fond memories as her resident his freshman year recalling how nurturing and well-rounded she was. Not only was she able to guide them during their freshmen year, Jennifer showed them what it meant to embody the values of the Terry Foundation- a true mentor and friend.

We hope Jennifer and all Terry teachers have a great school year!