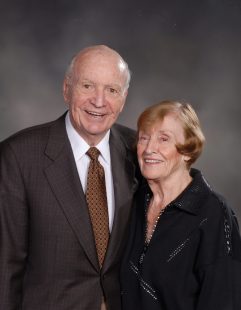 Our Founders, Howard and Nancy Terry, created the Terry Foundation to help young people help themselves. Their desire to invest in Texas students was born of their belief that a university – like the state it represents – is only as good as the educated citizens it produces. Today, the Terry Foundation funds freshman and transfer scholarships at 13 Texas public universities. The legacy of the Howard and Nancy Terry lives on in the thousands of Scholars who bear their name and exemplify the four Pillars of the Terry Scholarship Program every day: Scholarship, Leadership, Service, and Community.

The Scholarship That Started it All 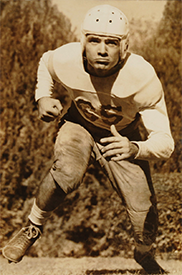 Native Texan, Howard L. Terry was born in Milam County in 1916. Mr. Terry attended the University of Texas on a football scholarship. While recalling his 30-minute interview with the Longhorns’ head coach, Mr. Terry once said, “I remember thinking that [Coach Chevigny] must not have many good football players, because at the end of that interview he made me an offer to come to the University without ever having seen me play.”

Mr. Terry worked his way up to a starting position by his sophomore year and quickly became a featured player on the team- playing guard on offense and linebacker on defense. During his senior year in 1937, Mr. Terry was chosen as the Longhorns Captain for a game against the heavily-favored Baylor team. UT’s 9-6 victory “shocked the nation” and was credited to Terry’s leadership. Upon returning to Austin, Terry and the Longhorn team saw the recently-completed UT Tower lit for the first time in their honor.

Mr. Terry always identified the receipt of his football scholarship as one of the most important events of his life. This gift eventually inspired the creation of the Terry Foundation, which could provide a college education for students who (like Mr. Terry himself) may not have the opportunity to fulfill their dreams otherwise.

According to Ed Cotham, Jr., Chief Investment Officer of the Terry Foundation, “I have often wondered how much the college scholarship was that Mr. Terry received in 1934. Room, board, and tuition was probably less than $500. When you consider how that scholarship was repaid, it has to be the greatest investment that any entity affiliated with the State of Texas has ever made.” 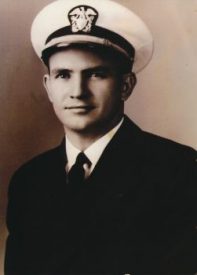 The leadership skills that Mr. Terry learned on the football field would eventually translate into every aspect of his life. He earned his B.B.A. in 1938. He was employed by Procter & Gamble until World War II broke out. He was 26 years old, starting a career in Kansas City, and taking care of a wife and two young children. In 1943, Mr. Terry decided to join the U.S. Navy. On his application, as his reason for joining, he wrote, “I am applying because I think my country now needs men like myself.” He listed hunting, golf, boxing, and football as activities that could have a bearing on his placement.

After his officer training, Mr. Terry volunteered for service on Patrol Torpedo (PT) boats, which were small, swift, and heavily armed vessels that the Japanese called “Devil Boats.” The Navy recognized that PT Boat crews were similar in size to football teams, so men with football and other competitive sports backgrounds were selected as officer candidates. After his training, Mr. Terry was shipped off to the South Pacific, where he eventually became Captain of PT-326 in 1944. His squadron was nicknamed the “All American Squadron” due to the large number of officers who had been All American football players.

Mr. Terry and his vessel became part of the fleet that invaded the Philippines, where he watched General Douglas MacArthur wade ashore and fulfill his famous vow to return. A couple of days later, Mr. Terry’s PT Boat was involved in the Battle of Leyte Gulf, the largest sea battle in history. A battle in which PT Boats, like Mr. Terry’s, courageously took on huge Japanese warships. Mr. Terry recalled making radar contact with the sizable enemy vessels:

“We had radar on our boat and we watched the enemy ships coming up the Strait. On the radar, you could usually see big stationary shapes that were islands. At one point, one of my crew pointed with amazement at the edge of the radar screen and said ‘Captain, that isn’t an island. It’s moving. That’s a ship.’”. It was an extremely dangerous time for Mr. Terry, and he could vividly recall how lucky he had been to survive the Philippines campaign.

Mr. Terry’s wartime experience undoubtedly shaped him and influenced him in ways that continue to impact the Foundation that bears his name. As he told Foundation President, Ed Cotham on several occasions, it “was probably the most important event that I was ever personally involved in.” 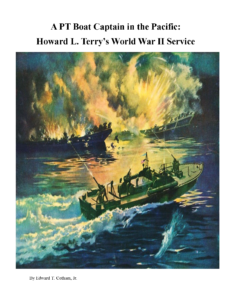 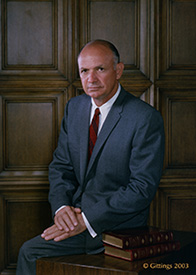 Mr. Terry returned to Procter & Gamble, from which he was recruited to set up a chain of appliance stores, serving as General Manager until 1951. At that time, Mr. Terry went into business for himself in lumber, construction, and development; building several residential subdivisions in Texas and other states.

Over the following years, Mr. Terry founded several businesses in various fields, including Business Funds, Marathon Manufacturing, Crutcher Resources, Allied Bancshares, and Farm & Home Savings. Beginning in 1979, he became a director and chairman of the Executive Committee of Penn Central Corp., a position he held until 1986. In 1981, he founded the Terry Companies, a multi-state corporation involved in oil & gas exploration and development.

The Creation of the Terry Foundation

In 1987, Terry and his wife Nancy founded the Terry Foundation with a $1.2 million dollar check. The first scholarship recipients, known since then as “Terry Scholars,” were selected at interviews held in the summer of 1987. Over the years, the Terry Foundation grew to be the largest private source of scholarships in the state. The Foundation is chartered to exist into perpetuity and will continue to provide for Texas students in the years to come.

Howard Terry’s long and successful life came to an end in April 2012 at age 95. In keeping with his own prediction, he maintained regular office hours and was active in the management of the Foundation until the very end of his life. His life was celebrated at a memorial service in Houston attended by a crowd estimated at 1,000. 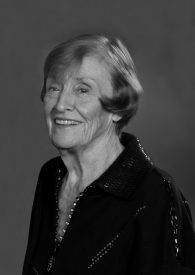 Nancy Terry was born in 1927, in Ogdensburg, New York, on the St. Lawrence River. She attended Ogdensburg Free Academy High School where she was active in cheerleading, tennis, skiing, and athletics. Later, she graduated at the top of her class from the School of Nursing at the University of Rochester, completing her training at the Highland Hospital in Rochester. Nancy enjoyed an active lifestyle, including snow skiing, ice skating, swimming and antique collecting, but her favorite hobbies were gardening, painting, and photography, which she continued to pursue for most of her long life.

Nancy later relocated to Texas and for over forty-five years was married to Howard L. Terry. In 1986, Nancy and Howard founded the Terry Foundation, a non-profit entity dedicated to providing four-year scholarships to Texas residents for attendance at Texas universities. Named in 2010 as the National Scholarship Provider of the Year, the Foundation will continue to provide scholarships for Texas students after Nancy and Howard Terry’s deaths.

Nancy and Howard Terry were honored many times over the years for humanitarian and philanthropic leadership. In 2001, they were honored by President George H. W. Bush’s selection as one of the national Points of Light. In 2011, the Houston City Council proclaimed March 22nd as Nancy and Howard Terry Day in honor of their contributions to the city. Most recently, the Terrys were named recipients of the prestigious Sterling C. Evans Medal, awarded by the Texas A&M University Foundation. The Terrys were the first non-TAMU graduates to ever receive this recognition.

Some reflections on Mrs. Terry and the early years of the Terry Foundation, by Yvonne Moody (TAMU 1987) 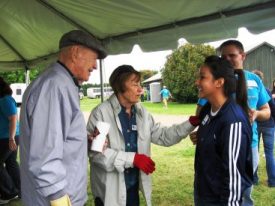 “Some of my earliest memories of Mrs. Terry are at the annual Winedale picnic. As we would arrive on the buses, the Foundation staff and directors would be waiting to greet us. Mrs. Terry was always there waiting with her camera. In the early days it was a Polaroid, and she would have you pose with friends for a photo. A staff member or spouse of the directors was always nearby to write down names. Mrs. Terry would hand them the first photo, and then she’d say, ‘Hold on now, we need to take another one for you to keep.’ Then she’d take a second photo to give to the student.

While Mr. Terry was an imposing figure, and sometimes intimidating, Mrs. Terry was easy to talk to and always offered a ready smile of encouragement. She always spoke her mind and never hesitated to ask you what you were doing to stay busy.

Mrs. Terry also sat on all of the early interview panels. As a senior, I was invited to serve on a panel, and was seated next to Mrs. Terry for those two days of interviews. I’ll never forget her giggles and remarks. She loved meeting the students and she always let everyone know which ones she liked the most. The affection between Mr. & Mrs. Terry was quite apparent, as was their genuine interest in the Scholars whom they supported. Mrs. Terry took an active interest in the lives of the Scholars and treasured the early gifts given by the graduating seniors. With her love of art, she particularly treasured anything that was made by the Scholars themselves, including drawings, paintings and picture collages.

In the later years when her failing health did not permit her to travel to events, she missed being able to personally visit with the students, and her presence was most certainly missed at the events.”

After participating in Foundation activities for many years, Mrs. Terry passed away peacefully at home in October 2012 at age 85. She will always be remembered for involvement in the scholarship program that bears their name.

This film was created to honor the accomplishments and memory of Howard Terry and to introduce current and future Terry Scholars to the namesake of the Terry Foundation and the vibrant community of leaders it builds with each passing year. Through interviews with those who knew him well, learn how Mr. Terry’s personal qualities and life experiences shaped his success and his eventual expectations for Terry Scholars.

Watch our other feature length documentary, Giving: The Story of the Terry Foundation.

The Foundation’s first documentary, Giving: The Story of the Terry Foundation, shares the Terrys’ vision- that through education, individuals would improve their own lives and therefore be able to impact the lives of others. It also demonstrates that the spirit of this Foundation and the mission of the Terrys live on through Terry Scholars around the world.