The Terry Foundation’s mission is to develop future leaders of Texas through access to education.

Terry Scholars are distinguished by a deep rooted desire to enrich the general welfare of the community and an established record of leadership. In order to select Scholars with the greatest potential for success, the Foundation’s selection committees focus on candidates with a demonstrated history of involvement in activities, outstanding scholastic achievement and a well-rounded personality marked by a desire to succeed.

The Terry Foundation’s vision is to create a community of educated leaders who utilize their talents to strengthen the state of Texas and impact the world.

Terry Scholars are challenged to achieve their highest potential in SCHOLARSHIP, LEADERSHIP, and SERVICE – to their university, the State of Texas, and the world. United by their common excellence and motivated by their pledge to give back to the Foundation, Scholars build their own COMMUNITY of fellowship and mutual respect on campus and as part of the ever-expanding network of Terry Scholar Alumni. These core values serve as the pillars of the Terry Scholarship Program.

History of the Terry Foundation 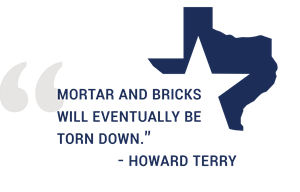 The Terry Scholarship Program was born of Howard and Nancy Terry’s desire to help young people help themselves. Knowing that universities are more than buildings and classrooms, Howard Terry had repeatedly declined to allow the universities to honor his previous contributions by placing his name on campus structures: “Mortar and bricks will eventually be torn down,” he reasoned. The Terrys believed, in the long term, that a university – like the state it represents – is only as good as the educated citizens it produces. Thus was born a desire to invest in the students who would attend the public colleges and universities in Texas.

The Terrys’ desire to help young people was influenced greatly by Howard Terry’s own college experience: he had attended the University of Texas on an athletic scholarship, becoming captain of the football team and graduating in 1938. His family origins in Cameron, Texas were modest and it was only through the generosity of others that his college education had been made possible. Mr. Terry never forgot the helping hand that he had received in attending college and was determined to extend that same help to a new generation of students. 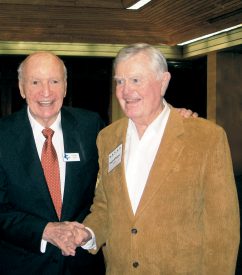 After seeking counsel from sources that included former UT coach Darrell Royal (an original Foundation Board Member) and Houston attorney Rhett Campbell (Board Member since inception and now Board Chair), the Terrys determined that their most lasting contribution would be through a perpetual endowment that would provide college scholarships for students who had demonstrated the capacity to become outstanding future leaders and who needed financial assistance to achieve their goals in higher education. From this simple concept, the Terry Foundation was created in 1986 to be the source of a perpetual scholarship program. The first scholarship recipients, known since then as “Terry Scholars,” were selected at interviews held in the spring of 1987. 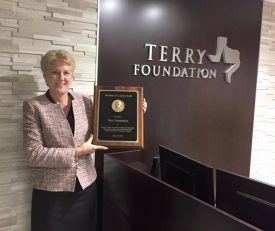 The Terry Foundation has become larger than the Terrys ever imagined, fulfilling in the process their dreams of making a difference in the lives of students across the state. In October 2010, the Foundation received the “Scholarship Provider of the Year” award from the National Scholarship Providers Association. In January 2016, The Terry Foundation was awarded the Mirabeau B. Lamar Medal for outstanding service to higher education in Texas. The award recognizes the impact that the Terry’s legacy has made; it is presented by the Council of Public University Presidents and Chancellors (CPUPC), the Independent Colleges and Universities of Texas (ICUT) and the Texas Association of Community Colleges (TACC).

Despite his extraordinary success in ventures that made the Terry Foundation possible, Howard Terry observed that “the Terry Foundation is the single most important thing I’ve done in my life, because it has enabled me to help more people that I would have ever been able to help otherwise.” His legacy lives on in in the thousands of Terry Scholars who now bear his name – and will carry his extraordinary vision into the future.