In fall 1987, 11 students at The University of Texas and 6 students at Texas A&M University comprised the first class of Terry Scholars. In fall 2017, over 1600 Terry Scholars will be enrolled across 13 of the finest public universities in Texas. These Scholars join over 3,000 Alumni in an ever-expanding family that now spans the globe and impacts nearly every major industry. 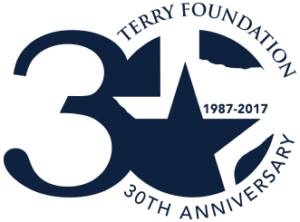 Due to the number and location of our many Terry Scholars, the Foundation has decided to forgo a single celebration event in favor of a tribute that is much more inclusive- a year of service. No matter where they live, Terry Scholars can honor the Terry Legacy and celebrate the growth of our Terry Family by giving back to their communities. We encourage everyone to share their stories of service and to add their service hours to our cumulative total.

At the end of June 2018, the Foundation shared the total number of reported service hours for the school year: