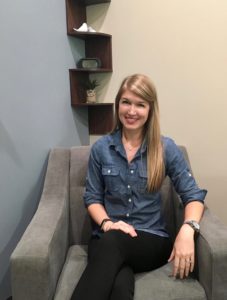 Nicole White Griffith (UTSA 2006) was a part of the inaugural class of Terry Scholars at UTSA. Because the organization was so new at the time, she was able to dig in and nurture the organization from the very beginning- much like what she does now in her profession. As a Terry Scholar, Nicole served as the service chair her freshman year and as president her sophomore and junior year. Although she highlights her time as an officer as being a very special part of her undergraduate experience, she recalls her senior picnic as being her favorite memory. Upon receiving that coveted gold pen, she hugged Mr. Terry. That exact moment is the one that is ingrained in her memory and says was so special given the timing of it all.

Known as the listener or helper to her friends and Terry Scholars, she took her knowledge from her psychology degree and her nurturing personality to the classroom. After teaching for a while, she decided to go back to school at Sam Houston State University to become a Licensed Professional Counselor. Four years, several classes, and two licenses later, Nicole left Conroe for Austin and ventured out into the world of therapy where her caring personality could shine.

After she became licensed as a Professional Counselor and a Marriage and Family Therapist, she was eager to help those that were struggling, and everything was new to her. She took a job at a community mental health agency in Austin working with primarily low income patients. This was a rewarding experience, and Nicole felt both challenged and rewarded by here work, but she knew she wanted to open her own practice. As of June, she officially left the agency after 2 and a half years and is now devoted full-time to her practice, Achieve Connection Counseling. Located in Cedar Park (right outside Austin), Nicole sees patients of all backgrounds but particularly enjoys helping young couples and young adults on their “journey of healing.” Running your own business, especially a counseling practice, can be draining, so Nicole says it is important to get your name out there but to keep self-care in mind.

When asked what self-care should look like, she said, “Do something. Pay attention to yourself. It doesn’t have to mean going to counseling. Invest in yourself. Do gratitude practice.” The biggest challenge that she points to is our tendency to get busy and often prioritize ourselves last. She went on to add that reminding yourself of what is important will help you get through each day. This is a crucial lesson for everyone- current Scholars and Alumni, alike.