The Importance of Being Seen: Advocating for Mental Health

Traditional Terry Scholar and Psychology major Forough Askarirad (UTSA 2018) recently planned and hosted the first Mental Health Day at UTSA. In planning this event, Forough drew upon a wide range of skills, one being leadership—a pillar of The Terry Foundation.

“I embody the Pillar of Leadership by taking the initiative to create change on UTSA’s campus and empowering students to seek support when they need it,” Forough states.

“Mental Health Day at UTSA was a 7-month long project that included planning, coordinating, communicating, mapping, advertising, and working with organizations, students, professors, and professionals. Working alongside a variety of people allowed me to not only grow skills for what it takes to construct an event but grow as person as well. I was unsure of what I was getting myself into at first, but I now know that my limits can be pushed further and further after having this experience and the support of the Terry Scholars.” 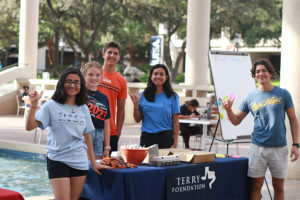 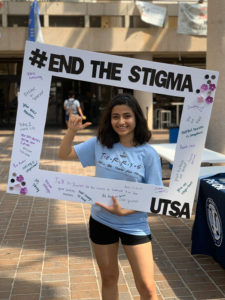 “I am very happy with how the first Mental Health Day at UTSA turned out, we had over 100 students attend the tabling event and the discussion that followed! I do plan to make this an annual event, because I truly believe it will help shift the conversations we are having about mental health and end the stigma associated with it!”

Forough shared how she has used this experience, among others, in fulfilling her commitment to give back:

“As the Director of Public Relations in our Terry Scholars Student Organization and creating Mental Health Day at UTSA, I have gained many skills that have helped me grow and become a more well-rounded individual. Through this work, I am continuing Mr. Terry’s legacy of giving back to the community by advocating for mental health resources and taking leadership positions which allow me to work directly with Terry Scholars of all walks of life”.

Leadership and Service are integral parts of giving back, the pledge a Terry Scholar. Equally important is the pillar of Scholarship; Forough shared what she is doing today that encompasses this pillar of excellence: 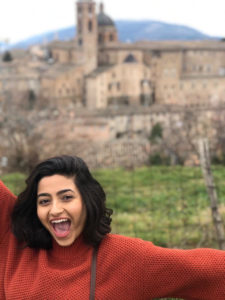 “Another exciting achievement was becoming a Gilman Scholar and having the opportunity to study abroad in Europe. As I am typing up this response, I am reflecting back on the past week that I have been studying abroad in Urbino, Italy. Having the opportunity to walk the streets of Urbino, while learning the culture and language of Italy and taking upper-division courses in Psychology, has opened up my eyes and given me a new perspective on life. This experience has already taught me so much and I am incredibly eager for the months to come!”

Being chosen as a Terry Scholar has a powerful impact on the life of every student—Forough shared her story:
“Becoming a Terry Scholar has changed my life forever. I have been blessed to be able to receive this honor, and [to] be the first person in my family to receive a college degree. Thinking back to when I was a refugee who felt so lost in an unfamiliar world, compared to the person I have grown into now, inspires me to push forward for my family now, and for my future family as well… Being a Terry Scholar means that I have been seen, heard, and given the chance to make a difference in the world, no matter how small…” 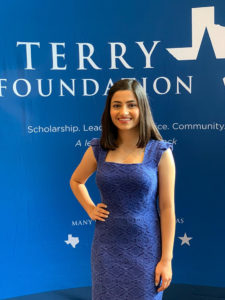 “Thinking back to when I was a refugee who felt so lost in an unfamiliar world, compared to the person I have grown into now, inspires me to push forward for my family…”

In closing, Forough shared some words of wisdom that she draws upon in her life that truly speak to the essence of how being chosen as a Terry Scholar has impacted her: