Over 70 Terry Scholar Alumni and current students came together in November for the annual UT-Dallas Terry Alumni Networking Event. This year’s event was planned and hosted by 2018 UTD Terry Transfer Scholar and Academic Coordinator, Angelica Avila, and it was a resounding success!

30 Terry Alumni from different fields and universities gave their time to meet students at the event, which featured 11 breakout sessions and an alumni panel. Each session offered the Scholars a chance to network with a Terry Alum in their field of interest. Additionally, the panel allowed alumni to provide focused advice to scholars. Panelists included

“I think that these events are extremely beneficial for students and it is our turn to give back to future Terry Scholars, just as we were helped by ones before us. Seeing eager students that are working hard to better themselves and honor the legacy of Mr. Terry every day is truly inspiring, and It is extremely exciting to be able to play a small role in their successes.”

Angelica credits the event’s success with: starting early, setting measurable goals, and reaching out to her Terry community — including UTD Terry directors, alumni chapter officers and the Foundation. Each provided crucial assistance along the way, with the Foundation sharing the event in the Terry Connect Weekly Newsletter and newsfeed, along with pinpointing panelists that lent diverse perspectives to the event. In reflection, Avila asserted that “the most integral key to the event’s success was the help that I received from my Terry community and the Terry Connect platform”.

Congratulations to everyone involved! 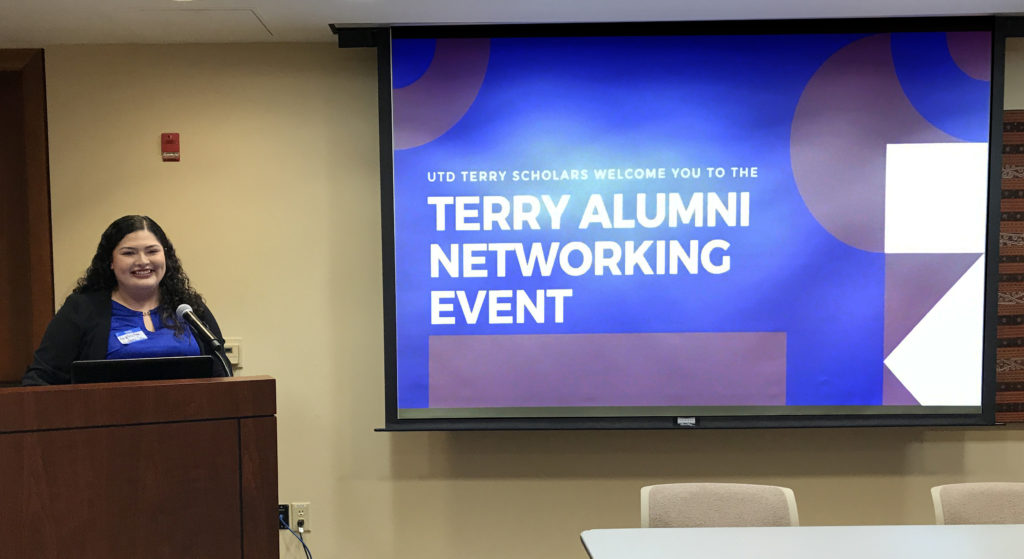 Angelica is a Junior at UT Dallas majoring in Sociology, with a minor in Human Resources. and most recently held a Leadership engagement internship at the Dallas Regional Chamber. If you would like more information on planning your own Terry Alumni Networking Event, please contact Amber Masso at the Foundation, and feel free to contact Angelica via Terry Connect!